Sweet mountain, am I right?: 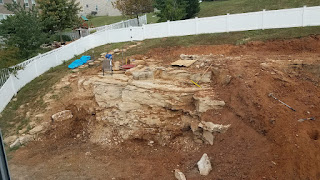 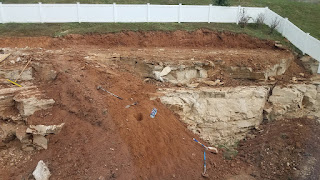 This immediately followed the second phase, while a winter season separated phase one and two.  We had often talked about how nice it would be to remove the upper nastiness that was our yard, to dig it back and put a retaining wall up there.  Little did I know that I unintentionally started that project while working on the staircase.
It started small, innocent almost, but turned into something much larger and much more demanding.  Bit by bit I scavenged for more steppers to continue the path to the gate, many time this meant finding a portion of a stone that was exposed and pulling it out of the ground to inspect it's actual size.  Sometimes it would be a LARGE stone that would turn over soil and make it unsightly.  Up until now we had a fairly steady slope to the edge all grown over with weeds that were cut to lawn length.  There were also a handful of small ravines created by rainwater washout.  Enough about what it was, lets get to how it will be.
Some of the upper part only had an inch or two of clay on it held in place with weeds.  It was hot and dry when I was working on it, and these areas quickly cleaned off with a shovel.  I would dig in and break apart several sections and did so until it was more than just a few inches thick.  I liked the progress that was being made, but there was a dark cloud over us.  This material had to go somewhere and I had just paid someone to clear out the fill not even a year ago.  Do I really start throwing dirt down again?  Turns out that the answer to that was yes.  And so it began, the upper section was on it's way to be cleaned off.
I want to tell you that spending 100's of hours toiling in the sun was an exaggeration, but it isn't.  I would often get home from work around 3:30pm, and be changed and shoveling by 4. I could work several house before it was too dark.  This only happened every single day for months.  The further I dug in. the further I'd have to toss the soil.  I managed to build myself another equally sized mound from the year past, but this time I had still barely started.
My intention was to find another hidden layer, why wouldn't there be one after all?  Once I exposed this next layer I'd learn exactly how much work was ahead of me.  Unfortunately this next layer never existed, and I was now faced with upwards of 4' of clay with a few inches of top soil on it.  Defeated in my attempts I was now stuck.  What now?  Stop?  Then what?
We might have ourselves a mess.  I began to wonder if I could find an operator that is confident enough to work equipment in a dangerous area.  The work zone now is about 12' off the ground and everything about it wants you to fall down it.  So, we kept digging.  At this point it is becoming more of a hassle to walk a shovelful of dirt ten feet just to toss it down, but there were very few other choices.  Eventually I had cleared a large enough area to prove that a flat stone area exists and now finally we might get someone to help.
Craigslist again proved helpful.  This time I had fewer people interested in the work as it is plain dangerous at this point.  We did find Charlie, and Charlie wasn't afraid of it and agreed to come in through the back (removed fence section) to bobcat the remaining to the bottom.  We had no idea how much material that was, and even seeing the mountain that was created by it still baffled us on the sheer volume.  Charlie was able to clear the top, and then use the mountain he created to return to the ground level no longer needing the opened section of fencing.

Check out the relatively flat surface, that outta be easy to build a wall on right?: 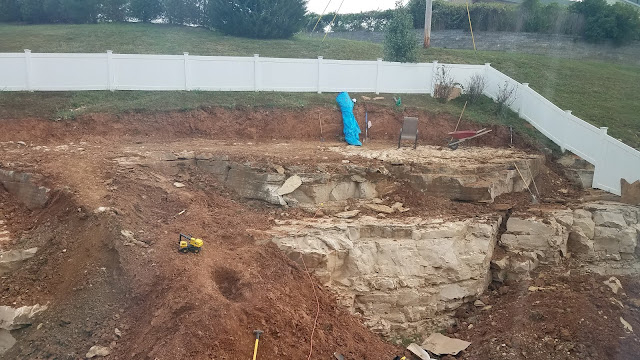 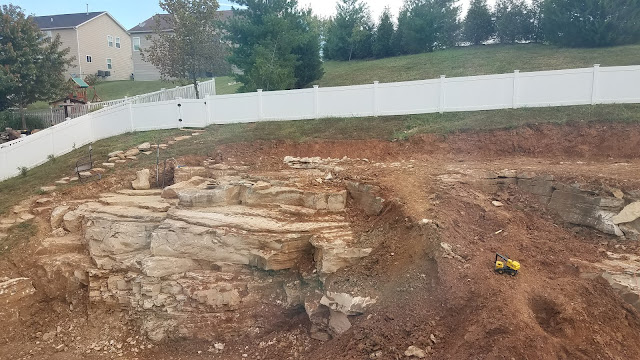 Here we are, the bobcat cleared area.  The upper most level of this stone bluff resembles a frozen ocean.  Nothing about it was flat and all the low spots were filled in with pressed into place clay.  Neat, now we get to clean that up.
This took a surprising amount of time, pealing up pieces, putting them into a wheelbarrow then bouncing my way to the mountain to dump it.  The cleanup of the upper area only took a few weeks.  Did I mention that the mountain is now also covering the middle section that I cleared out last year?  I didn't?  Oh, well we now had to clear that middle section again and separate the mountain from the rock wall.  We didn't want to have to pay twice more for removal, so let's dig shall we?
A week or so later we started looking for someone that can scoop up and remove this mountain of shame that has consumed our backyard.  Ray came to the rescue and filled 14 dump trucks with material and cleared the mountain over a weekend.
Now we have a flat yard again, and a flat upper area.  All clean and ready to rest. 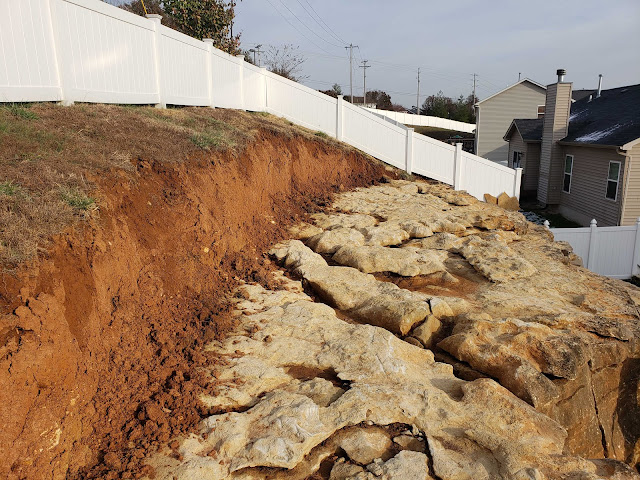 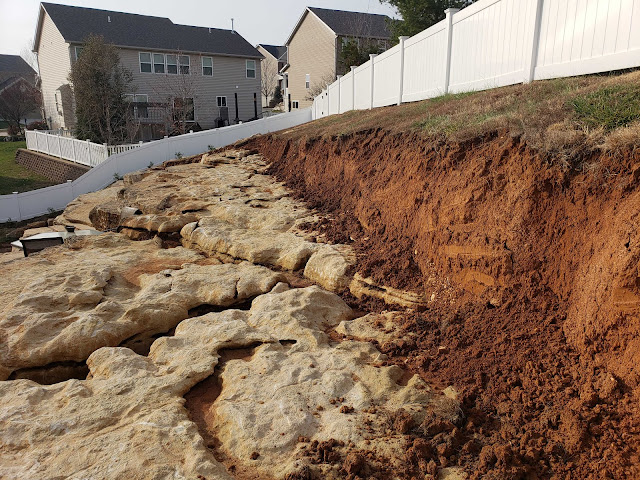 Back to first phase
Back to second phase
Fourth phase

Popular posts from this blog

Come along as we descend though time and space as we look towards the front room of our home.  On this epic journey we will witness its evolution into having the best built-in bookshelves known to man.
As projects often are, this one remains a work in progress.  To say I overbooked myself may be unnecessary, but I did need something to do during the cold months of winter.  This time I had experience on my side and what an ally that proved to be time and time again.
We wanted something nice, something usable, but also unique.  Why have just storage when you could have fun storage?  As you will see, these built-ins give a few extras to the kids, and help remind you of why being a kid is fun.
We started like we did in the past and bough…
Post a Comment
Read more

What you are looking at above is our current work in progress.  Although it is yet to be completed, this photo represents hundreds upon hundreds of hours worked.  While a major portion has been completed there is still so much more to come.
Grab yourself a snack and a drink, and come with us through the evolution of this project...

September 18, 2019
Fourth phase:
We made some mistakes.  We decided to wait through another winter season before attempting to retain that which we just cleared out.  I don't know why, but I just believed that as difficult as that clay was to remove that it just wouldn't move that much on it's own.  Just look at how wrong I was:


We should have either kept working, or put some sort of moisture barrier up there to stop the clay from eroding down.
None of that was done, and instead I came close to losing my fence due to the erosion.  Not only that but now our cleared out work area is again filled over with clay.  Since this is not acceptable we were given the choice of digging it and throwing it uphill to where it would eventually rest behind the retaining wall, or dig it off to the side and then later throw it back over.  I wanted to toss it uphill, I really did.  Why move it twice?  Too bad it was wet and insanely sticky.  We had to move it to the side, a shovelful of that wet clay is easily …
Post a Comment
Read more